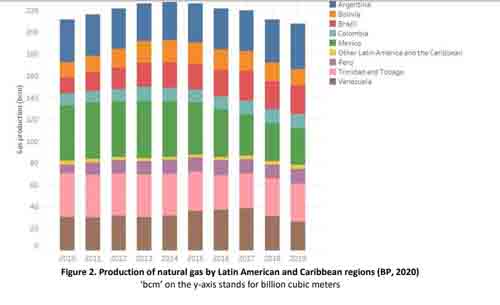 – When one considers the global movement towards renewable energy sources, driven largely by the need to bring the earth’s temperature down to 1.5° Celsius, the future of natural gas appears bleak.

This is according to a recent report prepared by experts contracted by the Inter-American Development Bank (IDB).

They believe that the energy transition movement and declining competitiveness leaves approximately 50 percent of the Latin American and Caribbean Region’s gas reserves, at risk of being left in the ground.

Key producers identified in the region are Argentina, Mexico, Brazil, Bolivia, Trinidad and Tobago and Venezuela.

The report also shared that natural gas in Bolivia and Trinidad and Tobago (T&T) is a meaningful contributor to those nations’ Gross Domestic Product (GDP).

The experts cautioned however, that the impact of gas resources for those producers are likely to change, since the global energy transition makes future gas demand, and therefore prices, quite uncertain.

It was observed that years ago, natural gas was thought to be a potential bridge fuel to a net-zero energy system, since it emits less carbon dioxide during combustion than coal.

The IDB report has since concluded that this is no longer the case, since renewable energy in the last few years has emerged globally as “the cheapest and fastest-growing source of energy in the world.”

With this in mind, the IDB consultants said, it calls into question, the notion that any bridge to renewable energy is needed.

The IDB analysts said fossil fuel reserves are now therefore being seen more as assets exposed to transition risk, meaning that they could become unburnable, or stranded during the energy transition.

In the case of Latin America and the Caribbean, they said an additional issue is that competition from abroad jeopardises domestic natural gas production.

In this regard, they highlighted that the region holds less than 5 percent of global reserves, and accounts for only 7 percent of production.

The report cautioned that the region would be facing stiff competition from major gas producers like Qatar, USA, Nigeria and Australia in the new energy transition era.

Given the favourable economics of moving straight to renewable sources of energy and the small market share the region has for its gas, the experts have since warned that considerable gas assets could be left stranded.

The analysts in their report said, “…we find that 70 percent of proven, probable, and possible reserves in Latin America and the Caribbean remain unburnable due to reduced demand associated with high climate ambition.”

It was noted that removing Venezuela from the sample, unburnable natural gas reserves in the rest of the region range between 39 and 50 percent.”

The report concluded, “that significant volumes of unburnable gas reserves for key producers are as follows: Argentina (34 to 37 percent), Brazil (15 to 30 percent), Venezuela (89 percent), Mexico (69 to 72 percent) and Trinidad and Tobago (6 to 8 percent) unburnable.”

In light of the findings, the IDB consultants said countries in the Latin American and Caribbean region, “need to diversify their revenues and energy strategy away from dependency on gas.”

The experts urged that governments should focus investments on the development of zero-carbon power generation capacity, such as wind, solar and hydro, and the use of electricity to displace fossil fuels in transportation, building and industry.