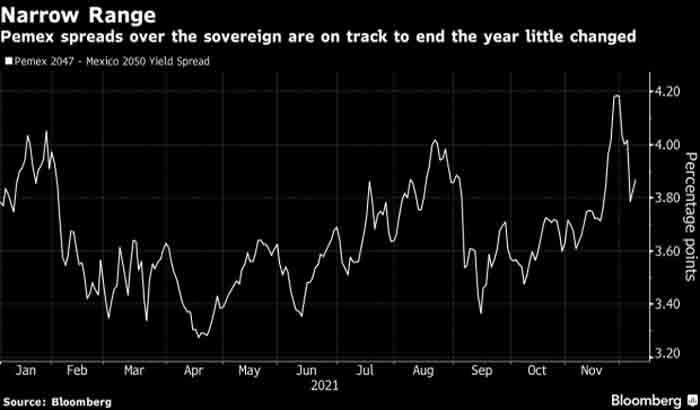 President seeks to reassure investors, but spreads are stuck

Mexican President Andres Manuel Lopez Obrador has pulled out all the stops this year to assure investors that the aging state oil company is not only going to survive, but also thrive.

Just this week, he announced a $3.5 billion capital injection into Petroleos Mexicanos, plans to create a new five-year business plan and a series of bond-market transactions to reduce the debtload. That comes on top of initiatives this year to take over debt payments, cut taxes and overhaul management. Lopez Obrador told investors that Pemex debt is as safe as the sovereign’s.

The campaign has been a failure with bondholders, even as the price of oil has surged 40% since December. The extra yield on Pemex bonds due 2047 versus similar-maturity government securities is right back where it was at the start of the year, stuck near 390 basis points.

Alejandro Di Bernardo, a strategist at Jupiter Asset Management in London, said there needs to be a credible plan to shore up Pemex’s operations, not just its financial profile.

“The capital injection actually doesn’t move the needle that much,” he said. “For the bonds to compress significantly over sovereign, I think we need to see a concrete action plan from the government.”

Pemex’s long history in Mexico has made it an institution, and for years it produced dividends that funded large chunks of the federal budget. But its debt has never been explicitly guaranteed by the government, and it recent years investors have questioned its viability without that support.

The company is flailing under $113 billion of debt, the most of any major oil producer, struggling to reverse over a decade of crude output declines, and is highly reliant on the federal government being willing to continue paying bondholders. Pemex replaced its chief financial officer last week amid concerns he wasn’t able to win investors’ confidence. The company may also end up spending nearly twice as much as originally projected to take over Royal Dutch Shell Plc’s Deer Park refinery.

The most recent attempt to shore up the producer came Dec. 6, when officials announced the capital injection. The state-owned oil company will receive the funds as part of a liability management transaction that includes issuing new dollar-denominated bonds and buying back old securities. In a note Wednesday, Moody’s Investors Service said the operation was credit positive.

The five-year business plan will be overhauled “to strengthen its financial position in the medium and long term, as well as to prepare Pemex for the challenges the energy sector will face,” according to a statement.

But for Pemex investors, it’s been a year of frustration. Yields on the $6 billion of bonds due in 2047 have climbed about 0.6 percentage point to 7.9%.

Still, investors snapped up the company’s $1 billion bond sale this week, picking up 10-year notes to yield 6.7%. The demand underscores the relatively strong returns from Pemex since Lopez Obrador took office in late 2018. It’s a junk-rated company with high coupons, so holders of the bonds due in 2047 have collected an average annual return of more than 9%, well above the 6.2% average for quasi-sovereign bonds from developing nations. Pemex has outperformed most regional peers apart from Petroleo Brasileiro SA.

And while the bonds have suffered in 2021, it’s possible they would have done far worse without the support Lopez Obrador has offered. Investors appreciate knowing he has the company’s back, even if they still see long-term obstacles ahead.

“Had AMLO not expressed such support for Pemex, spreads would likely have widened much more,” said Jens Nystedt, a senior portfolio manager at EMSO in New York, saying he’s still betting on Pemex bonds.

Luis Maizel, co-founder of LM Capital Management in San Diego, California, said that while he’s happy to hold his position in Pemex debt thanks to the government’s implicit guarantee, Lopez Obrador has yet to offer a real plan. According to him, spreads will only meaningfully narrow if the government can provide the company with more than just piecemeal support.

“They’re kicking the can a little bit further,” Maizel said. Investors “need to see that somehow Pemex can find a way to lower its needs for money and start making money.”


By Justin Villamil from Bloomberg News