Big flotilla of illegal gold miners splits up in Brazil 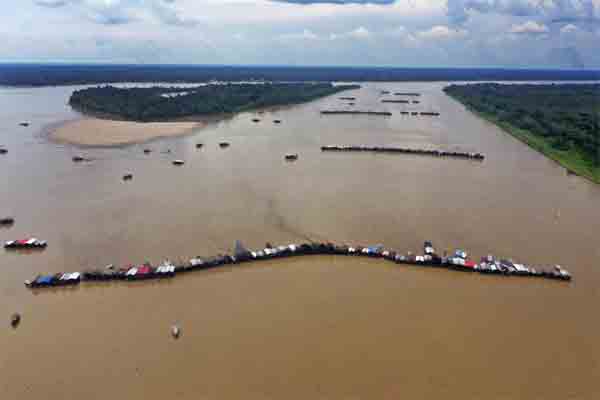 Dredging barges operated by illegal miners converge on the Madeira river, a tributary of the Amazon river, searching for gold, in Autazes, Amazonas state, Brazil, Thursday, Nov.25, 2021. Hundreds of mining barges have arrived during the past two weeks after rumors of gold spread, with environmentalists sounding the alarm about the unprecedented convergence of boats in the sensitive ecosystem.

Hundreds of barges of illegal miners dredging for gold were navigating along the Madeira River in the Brazilian Amazon on Friday, and researchers said they posed a threat of pollution — including toxic mercury — for the broader environment.

The barges were spotted this week by the municipality of Autazes, some 120 kilometers (70 miles) from Manaus, the capital of Amazonas state.

Smaller gatherings of barges are common along rivers in the region, but the latest collection drew international attention this week when Greenpeace and news media published images of several rows of rafts.

Brazilian Vice President Hamilton Mourão announced an imminent police operation in the area, prompting the miners to depart early Friday and head elsewhere along the river.

Miner Thiago Bitencourt Gomes, wearing just a pair of shorts and some flip flops, told The Associated Press on Friday that about 400 barges – some 3,000 people – congregated in the area after one miner found gold there and alerted the others.

“Here everybody knows each other. We’re all friends, we’re all related,” said the 28-year-old whose father, uncles, aunts and cousins were also part of the contingent.

The wood-walled rafts, some equipped with satellite internet and air conditioning units, were tied together, forming rows of houses on the wide and muddy Madeira River, a large tributary that flows into the vast Amazon downstream from Manaus. Miners and their families live, eat and work on the barges, some accompanied by their dogs and other pets.

“We know that in the law, we’re illegal. But we all need to provide for our families,” Gomes said, adding that the miners had repeatedly called on politicians to legalize their activity — in vain.

Another miner said a barge collected about 60 grams of gold — worth roughly $3,500 if pure — over 40 hours of work. Workers often took turns to work 24 hours a day.

Environmentalists are alarmed by the fact miners use mercury to separate gold from the sediment they suck from the river bottom and the process gives off toxic vapors as well as spilling some into the river.

Once in the river, it falls to the bottom and enters the food chain, contaminating fish, shrimp, turtles and other marine life as far as 500 kilometers (about 300 miles) downstream, said Paulo Basta, a researchers at the government’s Fiocruz science center

Basta said there is strong evidence of mercury contamination linked to cognitive problems, alteration of senses and hypertension, and he noted that the miners themselves have high risks of exposure.

“He takes the mercury in his hand, or puts it inside his bag. It leaks, drops on his leg and he gets contaminated through the skin. But the most serious form of contamination is by inhaling mercury vapor, which gets into the lungs,” Basta said.

Miners told the AP they didn’t release mercury, which is expensive, into the water but try to recover and reuse it.

Federal prosecutors in Amazonas state called Wednesday for federal and state authorities to coordinate a response and dismantle the illegal settlement within 30 days.

Federal police responded with a brief statement saying they were aware of the situation and evaluating options.

Miners told the AP on Friday that no authorities had come into contact with them. But fearing an operation, they left Autazes and continued along the river. The barges, pushed along by powerboats, headed off in different directions.

While local media reported tensions between the miners and residents of Autazes, journalists at the scene saw many locals taking advantage of the arrival of hundreds of visitors by selling food, electronics, diesel, clothes and even perfume.

Mining as a whole has become a sensitive issue, especially since President Jair Bolsonaro assumed office in January 2019 vowing to expand development in the Amazon region and to legalize some types of now-banned mining operations.

It is one of several factors driving deforestation, which began an upward trend in 2014 and has accelerated under Bolsonaro, whose father once worked as a wildcat miner.