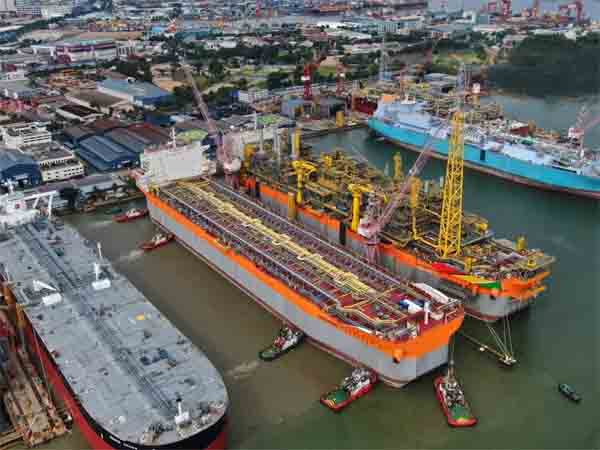 EEPGL—ExxonMobil Guyana—in fact, pursuant to the awarding of the contract has since agreed to pay over an undisclosed advance to SBM Offshore to begin works. SBM Offshore is the company that built and is currently leasing to Guyana, the first two FPSO’s—Liza Destiny and Liza Unity—and is in the process of constructing a third FPSO for the Payara oilfield in the Stabroek Block—Prosperity.

The contract handed to SBM Offshore is the second such large one out by ExxonMobil Guyana in recent days despite the fact it is yet to receive any government approvals and permits, environmental or otherwise. The Kaieteur News reported on Wednesday that despite the fact that the Guyana Government is yet to sign off on any of the required approvals for the development of the Yellowtail oil field development in the Stabroek Block, ExxonMobil Guyana had inked a “large contract” for the subsea installations for that project.

The news was disclosed on Monday by TechnipFMC, which said it was awarded a “large” contract by Exxon Mobil Corporation, affiliate, EEPGL, to supply the subsea production system for the Yellowtail development.”

According to TechnipFMC, “a large contract is between US$500 million and US$1 billion”
This publication last Friday reported too that the ExxonMobil Guyana was in talks with SBM Offshore with regards building the fourth vessel even before the public scoping exercise to inform the oil major’s Environmental Impact Assessment Study had been completed.

SBM Offshore, in confirming the Kaieteur News report yesterday, said it was “pleased to announce it has been awarded contracts to perform” the FEED contract for the FPSO.
Notably, the company said, “the FEED contract award triggers the initial release of funds by ExxonMobil’s subsidiary Esso Exploration and Production Guyana Limited (EEPGL) to begin FEED activities and secure a Fast4Ward® hull.”

Meaning, EEPGL would pay over to SBM Offshore, monies to begin works including activities related to engineer designs and securing a hull that would be, presumably taken to the Keppel Shipyard in Singapore, for topside installations before being installed in the Yellow tail oilfield.

SBM Offshore in making its announcement yesterday said, “following FEED and subject to government approvals in Guyana of the development plan, project sanction including final investment decision by ExxonMobil, and EEPGL’s release of the second phase of work, SBM Offshore will construct, install and then lease the FPSO and operate it for a period of up to 2 years.” First oil is expected in 2025.

Importantly too in the company’s announcement, SBM Offshore said that in order to strengthen its execution model, “given the current challenging market environment.” SBM Offshore established a special purpose company (SPC) with McDermott for the execution of the turnkey phase of the project.

To this end, “this SPC will benefit from the combined engineering and fabrication capacity as well as the experience of both companies in delivering EPC solutions to the energy industry. SBM Offshore will hold 70 percent and McDermott will hold 30 percent equity ownership in this SPC. The FPSO will be fully owned by SBM Offshore.”

McDermott, according to its website, is an international company that offers services in Engineering, Fabrication, Onshore Construction, Marine Construction Vessels, Procurement, Supply Chain Management, Startups, Commissioning & Operations and Consulting among other areas. SBM Offshore’s Chief Executive Officer (CEO), Bruno Chabas, in making the announcement yesterday said, “When finished, the FPSO will be the largest producing unit ever built by the Company.” According to the CEO, “we are also pleased to announce our partnership with McDermott and look forward to working together through the execution phase and deliver this world class project.”

To this end, Samik Mukherjee, McDermott’s Executive Vice President (EVP) and Chief Operating Officer (COO) iterated, “Our people and resources bring the proven project execution, integrated engineering and modularization capabilities essential for delivery, assurance and success. We will align these strengths with those of SBM Offshore to drive a cohesive, efficient execution strategy together.”

ExxonMobil has already handed out the contract—as reported yesterday—that TechnipFMC said it has been awarded “a large” contract by Exxon Mobil Corporation, affiliate, Esso Exploration and Production Guyana Limited (EEPGL), to supply the subsea production system for the Yellowtail development.”

According to TechnipFMC, “a large contract is between US$500 million and US$1 billion”
It was noted, however that “the full contract award will not be included in inbound orders, until the project receives final investment decision and government approvals.”

According to the company, “subject to government approvals and final project sanction, TechnipFMC, will provide project management, engineering, manufacturing and testing capabilities to deliver the overall subsea production system.”

It said, “…the scope of the project includes 51 enhanced vertical deepwater trees (EVDT) and associated tooling, as well as 12 manifolds and associated controls and tie-in equipment.”

To this end, Jonathan Landes, President, Subsea at TechnipFMC said, “We are very excited to continue our relationship with ExxonMobil through this award, which is our fourth within the Stabroek Block. We are proud of our dedicated Guyanese employees and are committed to the continued development and expansion of local capabilities.”
Scrutiny/Criticism

EEPGL—ExxonMobil Guyana—has, in recent years, been coming under increasing public scrutiny and receiving criticism over its high-handed approach towards projects in Guyana with negotiations being done for project costs to be recovered from oil revenues, and for which Guyanese authorities have little to no input.

Outside of its inability to audit the expenses for the Liza I&II, Guyanese authorities have also been coming under increased scrutiny concerning their dealings with ExxonMobil Guyana, as highlighted during the final scoping exercise to inform the crafting of the Environmental Impact Assessment for the Yellowtail Development.

According to project documents, Yellowtail will consist of the drilling of approximately 41 to 67 development wells (including production, water injection, and gas re-injection wells); installation and operation of Subsea, Umbilicals, Risers, and Flowlines equipment; installation and operation of a Floating Production, Storage, and Offloading (FPSO) vessel in the eastern half of the Stabroek Block; and— ultimately—project decommissioning.

EEPGL said the FPSO will be designed to produce up to 250,000 barrels of oil per day.
Onshore logistical support facilities and marine/aviation services will be used to support each stage of the Project. EEPGL is expected to use proven and good international oilfield practices. The company said it has incorporated many embedded controls into the overall Project design to reduce environmental and socioeconomic impacts.