Imbert welcomes IMF advice on
how to revitalise economy 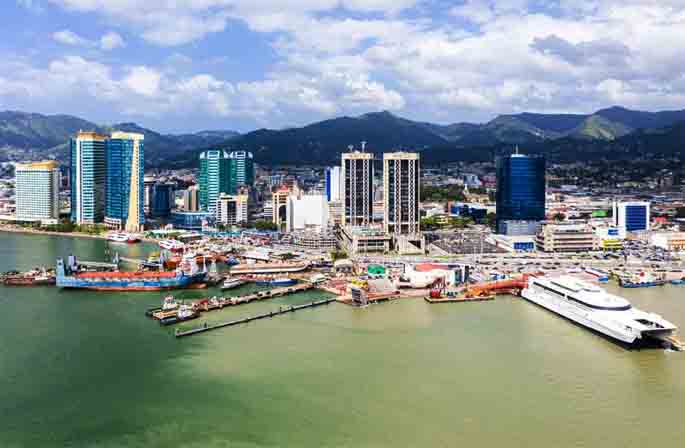 A view of Port of Spain from St Ann’s shows the city’s government and commercial districts.

Finance Minister Colm Imbert has said the Government was prepared to heed the International Monetary fund (IMF) recommendations to revitalise the economy.

In a media statement on Saturday, he responded to the IMF report, published on Friday, which stated the Government’s decisive efforts to sustain the country during the covid19 pandemic, now has a very positive outlook for economic recovery next year.

Pointing to some of the IMF’s recommendations like increased vaccinations, policy focused on reducing public debt levels and rebuilding fiscal buffers supported by a credible fiscal framework, Imbert said the Government was prepared to heed the advice.

“We are certainly prepared to heed this advice, and we have started to put in place remedial policies to bring our debt back on a lower trajectory.

“The IMF has made some suggestions in terms of a fiscal anchor: we are welcoming more detailed technical engagement. The same applies to suggestions to improve the infrastructure of our foreign exchange and money markets. We are welcoming any constructive solutions that will, in the end, improve our citizens’ life,” he said.

He added that the Government also valued the endorsement by the report on its handling of the covid19 pandemic.

Despite the challenges, such as energy production cuts, and price shocks which pushed the economy further into recession, Imbert said the IMF recognised the efforts by the Government to contain the spread of the virus, protect lives and livelihoods, and paved the way for a strong recovery.

Imbert said, “We thank the IMF for a thorough and constructive review of our macroeconomic and financial policies under covid19 and are keen to maintain such quality of exchanges in the future.

“We value the endorsement by the international community of the policies we have put in place to protect our population and certainly agree that the immediate priority is to foster the recovery.”

The IMF report also pointed to a projection for 2022 in real GDP growth of 5.7 per cent, supported plans for tax reforms and spending control, more efficiency in public spending, phasing-out subsidies and reforming public procurement, among other things.

Imbert added that in May 2020, a negative credit rating with a stable outlook by Moody’s clashed with the IMF’s report and also contradicted advice from other international organisations about policies geared towards recovery.

He said the Moody’s rating was done in the context of “wreckages” in the oil and gas markets because of the pandemic, related fiscal slippages,

“This decision by Moody’s collides with the policy advice we have received from all international organisations to protect our country and support the recovery in the current circumstances.

“At the time of the negative outlook in 2020, the Ministry of Finance had countered that the use of fiscal policy to cushion the impact of covid19 on the economy and the population was a responsible policy response. It helped avoid destruction of the economic and social fabric and was both sensible and sensitive in our view. What subsequently matters is the determination to bring public debt back under control in a credible manner,” Imbert said.

He said the IMF team wondered whether the pace of TT’s fiscal adjustment might not be too ambitious with regard to potential downside risks in a fragile global recovery.

“We think it is important to set a limit to public debt increase and use the windfalls of much higher oil and gas prices in a responsible way. This is the condition for affordable financing conditions over the long term.

“I am confident Moody’s, the other rating agencies, and ultimately international investors, will take note of our sense of priorities and responsibilities.”

Economist Vaalmiki Arjoon, commenting on the IMF report, said it will be a difficult task ahead for economic recovery because of the uncertainly of the covid19 pandemic and the slow vaccination rates.

At this point, TT’s economic performance reflects 2005 levels and although the IMF has painted a growth, the country’s GDP remained a cause for concern, he said

“While the IMF has forecast a growth of 5.7 per cent next year, our GDP will still be worse than where we were over 2006 to 2019. Higher energy prices are likely to persist well into 2022, and this will augur well for our revenue earnings bringing the deficit down to approximately $9 billion. These persistent deficits are generally financed by debt, suggesting that the debt burden will continue to pile up.”

“However, the higher energy prices also mean the State will be placing more funds into the Heritage and Stabilisation Fund (HSF), as the legislation governing the fund requires that a minimum of 60 per cent of excess energy revenues must be deposited in the fund,” he said.

Arjoon said a key risk continued to be with the global supply chain and increased shipping costs issues which heavily impacted the private sector.

Pointing out that TT’s largest trading partner was the US with a current inflation rate of 6.7 per cent, he said local inflation has been forecast to increase well into the third quarter of 2022.

Arjoon said, “While inflation is projected to be an average of 2.4 per cent in 2022 by the IMF, it is likely to be higher than this in the first half of the year. However, competition among retailers, food distributors and supermarkets will help to limit the extent of the price increase.

“Many retailers will also have some goods in storage since they were closed for the lockdown and these will carry over to the Christmas season, allowing them to avoid having to import as much as they ordinarily would have in previous years.”

Arjoon added that local manufacturers needed to take advantage of the surge in international spending caused by the pandemic’s pent-up demand, but in order for this to happen there was urgency for foreign exchange support.

Authorised dealers, he said, should increase the provision of forex to manufacturers to facilitate increased production and exports, thereby contributing to healthy growth next year.

“Already in the first six months of this year, their exports have increased as they were able to capture some added market share given the increased global demand, but the high prices of raw materials and shipping means that they will continue to need greater access to forex.

“While the Eximbank has provided much forex support to the sector, it is not a commercial bank, and it is there only to supplement the activities of the banks,” Arjoon said.

The relief provided to small and medium enterprises (SME) last year had good intention, Arjoon said but given that the sector comprised of 64 per cent of the private sector and only 272 loans were accessed, showed the difficulty in process.

He said the process to access the loans must be alleviated, allowing more SMEs access to these funds, as many were under deep financial stress.

“Many SMEs were turned away because they were unregistered, did not keep proper financial records or had inadequate collateral. This loan facility is supposed to be available over this fiscal year with the state assuming all the risks as they are providing a 100 per cent guaranteed repayment to the banks.

“However, it may be likely that many SMEs may be turned away again despite the state assuming all the risk, as banks have established standards for the provision of loans, plus they tend to operate in a very procyclical manner – periods of an economic downturn, they lend less.”

Arjoon said the Government also needed to reconsider its strategy for implementing taxes, which appeared to be hastily and aggressively done.

“It appears that the state wishes to aggressively implement the TTRA to improve tax collection. This begs the question – if they are confident about the ability of the TTRA to boost collections, then what is the need to place the private sector under added financial stress by implementing a new tax now, the property tax?

“Those same monies used to pay this tax could instead be used to pay some workers’ salaries and improve their households’ purchasing power.”

The IMF report supported the move for the property tax and the establishment of the revenue authority.

He cautioned that there was no room for financial mishaps and bureaucratic delays in the public sector.